Blog
You are here: Home / Blog / Addiction Treatment / Not into the 12 steps but looking to stay sober? Here’s what to try ne...

Once taboo, an increasingly heard chorus of addicts and alcoholics in recovery are bemoaning the 12 steps. They say they are ancient, ineffective, and not based on science. In particular, 12-step programs have proven ineffective for many opioid addicts who have a difficult time accepting personal responsibility for their addiction. Many of them were prescribed medication by a doctor, after all, and took it as directed. If the new face of addiction is demanding alternatives to 12-step programs, we must provide it. Everyone deserves to live a happy, sober life. They say that while it is true “the program” has helped tens of millions of people, it’s also true that the program works well for the people it works for. We don’t have statistics on the number of AA “dropouts” who ended up staying sober on their own. Perhaps they took the familiar from AA and discarded the rest. Here are some other groups offering recovery support:

Next to AA, this is the next most common choice of recovery groups in the U.S. SMART Recovery bases its methods on self-reliance and evolving science. One of the biggest problems people addicted to opioids face with 12-step programs is resistance to the medication-assisted therapy that many need to maintain sobriety. Elizabeth Brico explains it all too well in an informative piece for Stat.

“Sadly, there’s a lot of misinformation out there about medication-assisted therapy for drug addiction. Take, for example, a comment made about medication assisted treatment by Tom Price, who recently resigned as secretary of Health and Human Services. “If we’re just substituting one drug with another,” he infamously said, “we’re not moving the dial much,” indicating his clear preference for faith-based and non-psychoactive interventions. The most recognized providers of those kinds of interventions are the 12-step fellowships, which include Alcoholics Anonymous and Narcotics Anonymous. If that’s what the secretary of health said works best, we should count ourselves lucky that thousands of free 12-step meetings occur every day across the country. Right? Wrong. These programs are making the opioid crisis worse by making recovery from opioid addiction harder than it already is. By turning their backs on people like me on medication-assisted therapy to kick opioid addictions, these programs are prolonging addiction and contributing to overdose deaths.” (1)

Harsh words, indeed, but true ones. A “substance use disorder” for DSM-5, the so-called bible of mental health diagnoses, refers to when a substance is interfering with a person’s daily life. When a person on medication-assisted therapy is working, in recovery, and rebuilding their life and their relationships, they are not considered to be an active “addict” in the medical sense.

It’s important to note that some NA chapters are more progressive than others about medication-assisted therapy. It is a non-issue in many of them, but you always will encounter “old school” members and the accompanying rhetoric. 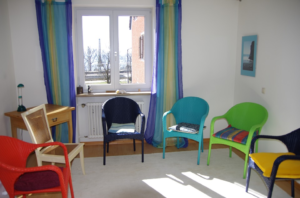 AA is run by unscreened volunteers and is not supported with tending law enforcement or the medical establishment at its meetings. Unfortunately, it can be a playground for predators or just plain mean people. In a 2015 piece on the issue in The Guardian, one woman described her experience. “What I did not expect was to be fresh meat when I walked into AA meetings….Men wanted my number and wanted to date me. I was newly sober, clueless and craving love….“It never caused a relapse, but it did make me question the joy of sober life, and also consider suicide….The world seems like a really mean place when you are surrounded by unhealthy people.” (2)

Secular Organizations for Sobriety (also known as Save Our Selves) is a non-profit group not affiliated with any religious or secular organization, as its website points out. The no-nonsense principles of SOS make it clear sobriety means abstinence from all drugs inside these rooms. The principles also state very plainly the group has no interest in controversy, only in helpings its members maintain clarity and strength in sobriety. From its website:  SOS is a nonprofit network of autonomous, non-professional local groups, dedicated solely to helping individuals achieve and maintain sobriety/abstinence from alcohol and drug addiction, food addiction and more. S.O.S. headquarters began in Jim Christopher’s apartment, as did his early meetings, but later the organization found a home at The Center for Inquiry West (CFI-West) in Hollywood, California.  Today, S.O.S. meetings span the globe, and it’s headquarters can still be found at CFI West.

Some may find it odd that a person would turn away from a 12-step program such as NA or AA, yet embrace that same program when narrowed even further to focus only on Jesus Christ as their higher power. However, if someone grew up in a Christian church, the 12-steps practiced inside a Christian church led by clergy can prove enormously useful. The vibe is much different than in a non-denominational, non-religious 12-step group. Real stigma about addiction coming from ‘the rooms’ In a recent VICE piece, famed addiction journalist, author and recovering addict Maia Szalavitz talked about where the stigma surrounding addiction comes from. Writes Szalavitz in a disturbing commentary stemming from allegations of sexual abuse against actor Kevin Spacey:

“In fact, much of the stigma associated with the addiction model comes from the way the concept is so often used as an excuse for all types of bad behavior—and the way rehab is viewed as a site to begin restitution and penitence. This is not helped by the fact that the majority of American rehabs are based on the 12 step model, in which participants are encouraged to surrender to a “higher power,” take “moral inventory,” ask God to remove their “defects of character” and make amends to those they have harmed. The fact that so many rehabs have historically used degrading and punitive tactics that assume participants are self-centered manipulative liars also plays into the idea that addiction is really sin.” (3)

LifeRing Is another non-secular recovery support alternative. LifeRing focuses on empowerment instead of dwelling on being powerless. From its website: “Our approach is based on developing, refining, and sharing our own personal strategies for continued abstinence and crafting a rewarding life in recovery. In short, we are sober, secular, and self-directed.”

In an interview last year with Rehab International, Szalavitz said, “It’s clear (the 12-Step program) does not work on opioid addiction,” Szalavitz said. “If you believe that your method is the best method, you should not have to be forcing people into it.” (4) The model also encourages everyone to keep their “disease,” of course, “anonymous.” How much more stigmatizing can you get, say their critics. Is now really the time to be ‘anonymous’ about addiction? Many people with extraordinarily firm faiths in God or another higher power also have condemned AA. Their reasons often have to do with the “anonymity’ part. While mothers of the dead are calling for openness about drug and alcohol addiction, those afflicted with it are encouraged to stay quiet outside their 12-step recovery rooms. It’s a conflict that makes no sense in the minds of many, particularly during a public health emergency.

“In fact, many recovering addicts are not in a traditional program. Some manage recovery independently. Others join Refuge Recovery, a program based on Buddhist principles, or Smart Recovery, which encourages reliance on self rather than a “higher power.”

No matter the path, why should they remain silent? “It’s like being a vegan but only being able to talk about it in a kitchen or a hospital,” said Fay Zenoff, executive director for the Center for Open Recovery, “or with another vegan.” (5)

Hannah’s Arrival, The Alcoholic’s Grace: A Theoretical Review of Arrival...
Scroll to top