Blog
You are here: Home / Blog / Recovery / LGBTQ in Recovery

When I came to the realization that I could no longer drink, I thought I was greatly disheartened. Anger and resentment against God pumped through my veins. It had only been a couple years since I came out as bi-sexual (which some people just put off as gay) and I was coping with my new lifestyle by working alcoholically and drinking the same. Now, I had to accept the fact that I have to endure the rest of my life on this Earth without drinking. Distressed, bereaved and spiritually enraged, I felt that God was punishing me for a life I never asked for. What I did ask him for was happiness, a mentor, romantic love and success in my career field. Alcohol inhibited any and all of those blessings from arriving.

Investigative journalist Walter Armstrong attests, “Alcoholism is the granddaddy of gay health problems. It may have little of the urgency or newsworthiness of crystal meth, say, or HIV, but it remains one of our community’s (and nation’s) most insidious and intractable destroyers.” (http://www.realjock.com/article/985) The disease of alcoholism is definitely insidious. The progressiveness of the disease in my life gained momentum when the pressures of living “in the closet” became near unbearable. In coming out, it seemed like the news spread like wildfire. I began to lose trust in others. Disclosure with a few resulted in many knowing more about my personal life than I had ever let on before. I could not trust myself with the truth, let alone others. So what did I do? I moved residences, got a new job on my ideal career path and isolated when I drank. The objective was not to drink alone but rather to avoid being disappointed by the lack of gay men at the local dive bars and also not to be overwhelmed with feelings of inadequacy upon entering a gay bar. Alcohol cornered me – putting me right between its menacing grip of destruction, self-pity and isolation.

Upon entering rehab I found great solace and comfort in the support and acceptance I received from most men who were also clients of the treatment facilities. By taking that simply yet bold leap to enter treatment for alcohol abuse and dependence I took myself out of isolation. Rather than entering general population of the world right off the bat, I entered a population of men who knew and understood my pain as an alcoholic. This was one of my first experiences introducing myself not only as an alcoholic but also leading with the fact that I don’t identify as straight – a conversation that seems to arise quickly whenever men socialize. For the first time in my life, I did not feel so different, estranged and alone in a world where everyone else seemed to enjoying their booze in moderation. I thought my drinking was a homosexual problem when in fact I discovered and accepted alcoholism for the tyrannical spiritual malady it truly is. Straight men who stood by me, shared with me and attended groups with me led me to this understanding.

Accepting my sexual orientation for what it is takes courage each and every day. Much of my experience as a man pursuing other men revolved around alcohol. I struggled accepting myself and the struggle to accept other gay men was even greater. With that, I accumulated a lot of guilt and shame from drunken one-night stands with men who identified as straight. The shame and guilt I bore was not mine to bear. According to a study published by The Journal of Social Psychology,  “heterosexual people are more likely to find members of the same sex attractive after consuming alcohol.” The journal furthered the conclusions drawn from the study stating, “men who had more than ten alcoholic drinks were just as interested in the men depicted as they were in the women.” (http://www.newnownext.com/straight-men-drunk-gay-sex-study/05/2017/) In the words of R&B artists Jamie Foxx “blame it on the a-a-a-a-alcohol…”. Rehab gave me the healthy, sustainable friendships with gay and straight men I had always longed for. 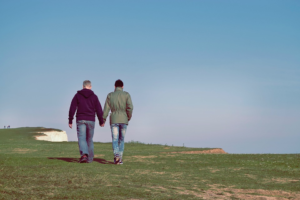 In addition to rehab, spiritual and emotional gains have been made for the better due to the acceptance and tolerance I found in the meetings of Alcoholics Anonymous. Two of my sponsors have been straight men and most of the calls I receive daily are from the like. My sexuality doesn’t define me, nor does it define my disease. I drink from the fountain of community with cups of friendship because AA and treatment facilities did not close their doors on those who identify along the spectrum of LGBTQ. Walter Armstrong went on to note that  “AA opened its doors to gay men two years after its founding in 1935, whereas gay-sensitive treatment centers remain few and far between in some parts of the U.S. It’s estimated that there are now more than a thousand gay AA groups nationwide, with 12-step.programs for everything from crystal-meth addiction to sexual compulsion increasing the count by half. “ (Armstrong, “Just a Sip? Gay Men and Alcoholism”, http://www.realjock.com/article/985)

In any discussion revolving around homosexuality it is necessary to address the lack of progressiveness and acceptance in normative culture. Matthew Todd, former editor of Attitude, argues that for gay men it is “our experience of growing up in a society that still does not fully accept that people can be anything other than heterosexual and cisgendered [born into the physical gender you feel you are]… It is a shame with which we were saddled as children, to which we continue to be culturally subjected.” (Owen Jones, “Gay Men Are Battling a Demon More Powerful Than HIV”, https://www.theguardian.com/commentisfree/2016/oct/20/gay-men-hiv-homophobia-lgbt-drink-drugs). I have my own stories of being sanctioned, ridiculed, ostracized and discriminated against for identifying as bisexual. Even in treatment I experienced the pain of being called a “fag” by a fellow client who bore tattoos indicating allegiance to white supremacy. He later apologized and our friendship was built on the foundation of sobriety and clean time rather than our differences.

Recovery and AA have an irrefutable power to bring people who would typically not mix together.  Armstrong notes that “Recent studies have found comparable trends in alcoholism and alcohol abuse between gay and straight men.” (“Just a Sip?”) We alcoholics are not all that different regardless of who we want to spend the rest of our lives. Getting sober not only helps me come out of the closet but also accept myself. I attend AA mens meetings just as much as I attend gay meetings. I pray to a God of my own understanding. And the best part about early sobriety is that I’m not looking for sex or romantics for the next year at least.

So the pressure is off. Be yourself and defy whatever defamations alcoholism is trying to tell you. Getting sober is an affirmation uninhibited by race, creed, sexual orientation or religion. It’s a universal language of love that will endure as long as mankind and alcohol co-exist. If you are struggling with alcoholism and your identifying as anything other than straight, address your disease first and I guarantee the know-how and courage to face life’s other many mysteries will reveal itself.

Theories on Addiction
Scroll to top